Please enjoy this excerpt from the new fantasy novella:

“Tell Us the Mermaid Story”


There was no one around on the dock, where several different boats were lined up. Queenie got in the canoe that she sometimes came and sat in, even though she never took it out on the water.

This time, she untied it before she sat down, then she picked up the paddle and said a prayer before taking the boat out, almost to the middle of the lake.

“Oh Lord, you know I can’t swim, and I’m scared to death, so please don’t let me fall in and die out here.”

The whole time she was paddling away from the shore, her heart was pounding. It was mostly from fear, but was also from excitement. She couldn’t wait to see what Gem was about to do.

When she was practically in the center of the lake, she stopped paddling and looked around. She was just about to call out Gem’s name, when she swam up alongside the canoe and spoke to Queenie.

“Queenie is not a fraidy cat today. Good for you Queenie.” She looked proud of Queenie for making it out there in the boat.

Ever since Gem learned how to understand the expressions Queenie had used over the summer, she made a point to use them whenever she could.

Gem was happy to see Queenie laugh at what she said. She liked pleasing her. She told her she was ready to do the flip that Queenie came to see. “You watch Queenie. Gem is an awesome flipper. Here I go now.”

Gem moved away from the canoe and made a small leap, then down she went, as fast as she could, straight to the bottom of the lake.

It was a lot deeper than it looked, but Gem only went down far enough to give her the space she needed to make her move.

She made a sudden U-turn, then went whizzing back through the water, up to the top as fast as she could swim.

When she reached the top, the crown of her head broke through the surface of the water, right where the sun was shining and made the water glisten.

Gem leapt high in the air, then suddenly did a back flip, and went diving back down into the water. Queenie was amazed.

She watched how the top of Gem’s head hit the surface of the water again; this time as she headed back down into the water.

That’s when Queenie saw the very best part of all and began going crazy in the boat with applause. Gem’s beautiful and massive tail flipped back and forth as she showed off for Queenie, then her body disappeared into the water and she swam back down towards the bottom.

Queenie breathlessly peeked over the side of the boat, too excited for words. Gem came flying back up through the water again and took her off guard. Queenie looked up in the sky, just in time to see Gem do another flip.

All Queenie could think was how awesome it must be. She wished she were able to swim and jump and turn flips with Gem. She loved her mermaid friend so much. She was really going to miss her when it was time to leave the island.

Queenie was so busy enjoying the show Gem was putting on, that she forgot to be careful where she sat in the canoe.

She slid to one end, and the boat was suddenly unbalanced, but Queenie didn’t even realize it. She jumped up and started clapping when Gem was in the middle of a really high flip. “Yay! Go Gem, go!”

Before she knew what was happening, the canoe tipped over and Queenie went flying into the water. For a few seconds, her head bobbed up and down above the water, while she kicked crazily and her arms just kept fighting the water. But then, without warning, she started going under. 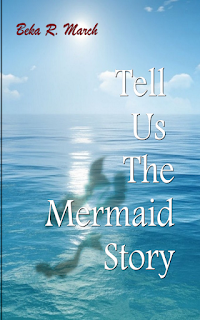 You can still Request your
GIFT COPY TODAY!

Popular posts from this blog 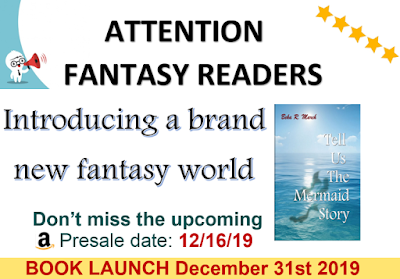 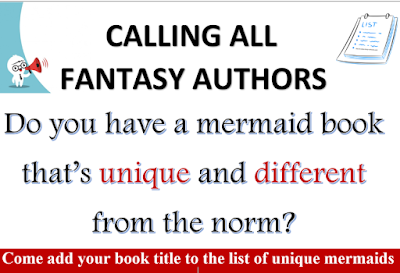 A New Clan of Merpeople Are About to Make a Splash! 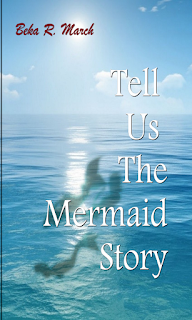 The new mermaid book by debut fantasy author Beka R. March is now available for pre-ordering on Amazon. Hey fantasy readers. Are you ready to get a brief introduction to a new clan of merpeople called the Merquaticans. Well be sure to get your order in for the new mermaid novella, Tell Us the Mermaid Story. And don't forget to leave a review about the book and let the author know what you think.

Tell Us the Mermaid Story can be yours as a free gift copy, if you request it in time. If you'd like to be one of the first to read and review this exciting new mermaid tale, simply click the link below and send your request before December 31st, the official launch day of the book.